WHAT REALLY HAPPENED AT ELLE'S "WOMEN IN HOLLYWOOD" 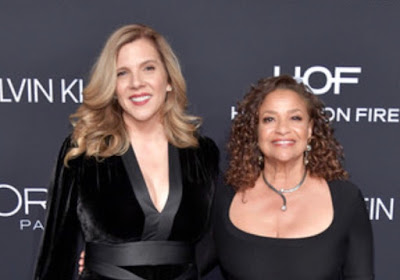 Last night, Krista Vernoff (Showrunner, Grey’s Anatomy) and I were Shonda Rhimes’ guests at Elle’s 25th Celebration of Women in Hollywood.  If I could press a button, say "Beam me up Scotty” and take you back, I would snatch you away from whatever you are doing just to spend a few moments experiencing the most dynamic, inspirational, heartbreaking and take all the “bullshit out of the game” testimonies of last night’s honorees: Shonda Rhimes, Lady Gaga, Charlize Theron, Mia Farrow, Keira Knightly, Yara Shahidi, Sara Paulson and the women of Black Panther Angela Bassett, Lupita Nyong’o and Danai Gurira. 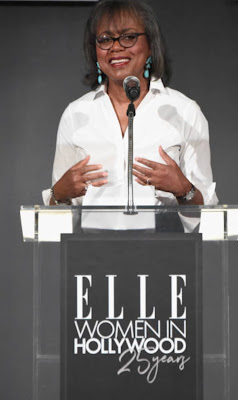 The night began with Anita Hill who was introduced by Kathleen Kennedy (the incredible producer for Steven Spielberg). Anita talked about how she has lived for 27 years with what it means to “speak truth to power" and the Hollywood Commission that she is leading on sexual harassment. The audience stood and cheered before she said a single word. 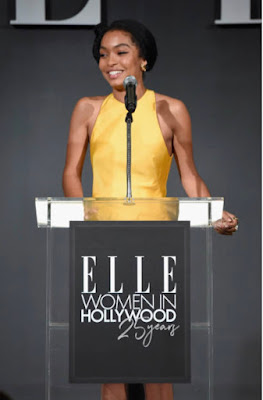 Yara Shahidi, the youngest honoree at the age of 19, was introduced by Kenya Barris, the creator of her hit show Black-ish. Yara left the audience stunned with her brilliant tirade about pseudo patriotism and daring to be an idealist in today’s world. The Harvard freshman whose political consciousness and clear civic engagement made Kathleen Kennedy remark that “2020 we are looking for a candidate.” 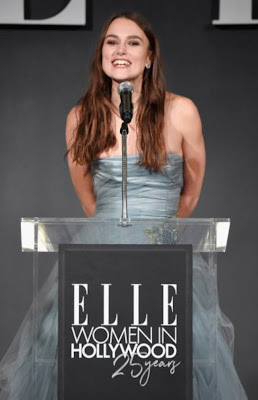 Keira Knightley, introduced with real grace by James Corden, spoke very directly about creating more opportunity for women behind the camera and not being defined by a man, like her character in the film Colette, a woman who is pushed to write novels under her husbands name and then fights to let her talent be known. Keira recently revealed that she is not allowing her children to watch Disney movies because the princesses don’t uphold her feminist ideals. 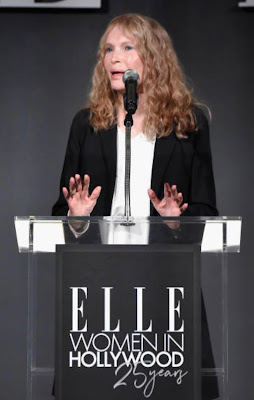 Mia Farrow, who stood alone decades ago fighting for her daughter and the allegations of sexual abuse by her husband, spoke of what it was like to be groped and have a studio head stick his tongue down her throat at 17 years of age.  Introduced by her son Ronan Farrow (the journalist who exposed Harvey Weinstein) she joked ”...what a disappointment you turned out to be.” Mia ended with the challenge that she wanted to live to see not progress but “unequivocal equality." 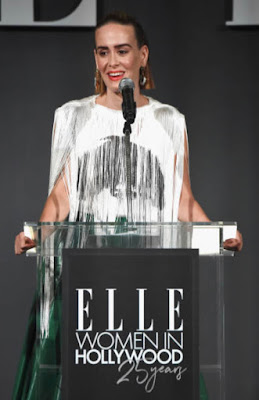 Sarah Paulson, introduced by her best friend Sandra Bullock (who was hilarious), talked about her insecurities, not taking her success for granted and living up to the responsibility it brings. 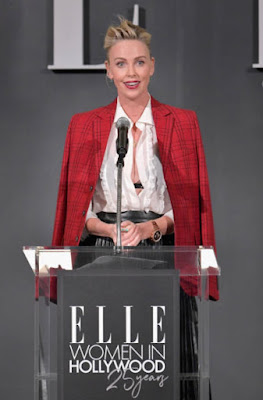 Charlize Theron whose honor came late in the evening apologized for having had too many drinks for a mother of two and warned her use of the “F” word in her speech. “This fucking year…incredibly powerful for women and also an incredibly shitty one.” The room howled when she told Sarah Paulson, who was chatting with Ryan Murphy, to “shut up bitch I’m talking." Charlize spoke about how her career choices were always included strong women but none of them compare to the fearlessness of women like Christine Blasey Ford, Anita Hill and the myriad who come forward to tell their truth.  “Death threats be damned.” She also remarked that she did not know when she did Mad Max that they were “actually giving ideas on how to run the country. I thought it was more of a cautionary tale.” 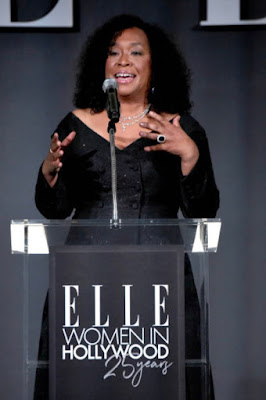 Shonda Rhimes shut the house DOWN and took it all the way BACK UP with “Black Girl Magic.” Introduced by our Grey’s Anatomy star Ellen Pompeo, Shonda took to the stage and pronounced that “women need to brag …men do it all the time sometimes about nothing. I am awesome!!! I am the highest paid Showrunner in television.” The room exploded in shouts, applause and a standing ovation with Ryan Murphy standing right along with us. Shonda made us understand that we should and must claim our power! 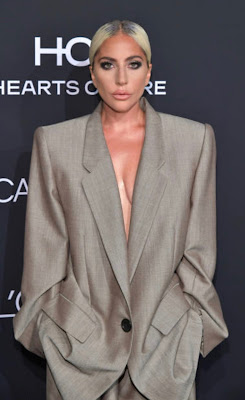 I looked up and Jennifer Lopez had swirled into the room looking gorgeous to present Lady Gaga who's acceptance speech was the most heartbreaking. When she spoke the room quieted with not even a whisper. Dressed in an oversized man’s suit she explained that she had to forego Hollywood’s expectation of dressing to impress but rather to “use what really matters, my voice.” Gaga shared that at age 19 she had been sexually assaulted by a man who she still did not have the “courage to speak his name.” She talked about her pain and how she can hardly stand to watch the news and what is happening in our country. Gaga pleaded that mental health must become a primary global issue so people, unlike herself, that don’t have resources can get the help they need. She praised Anita Hill: "You give me courage.” 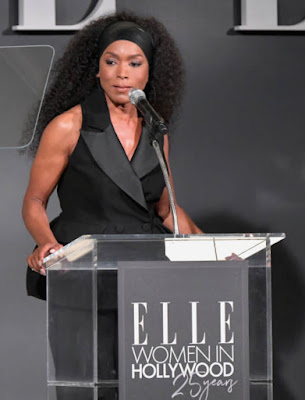 Finally Angela Bassett, with long beautiful bushy hair hanging down her back looking like the true QUEEN of WAKANDA, left us with these positive words, “As I stand here tonight we are going to win in every way imaginable. But we have to do it together. Women are a nation of powerful human beings……we are unstoppable.”


This evening will certainly be reported as to …who was wearing what, who came with who and who was not invited but the real takeaway for me is that the nature of the universe is change and some of us can stand by quietly and wait for it to rain on a dying flower garden or we can pick up a water hose and give it that burst of water it needs to flourish.


We must all be architects of change and that means we must have courage and speak loudly when it is all to easy and maybe sometimes convenient to stay quiet.  Women are not always perfect or right but we must level all the playing fields to be equal. Yes EQUAL. Equal in the workplace, on the playground and in the eyes of the law. Justice can no longer be blind. It is time for us to remove the blinders. It is time for real change.


Coming next:  Shut up and Sit Down by Cinque Henderson. The experiences of a substitute teacher and how discipline can set students free. 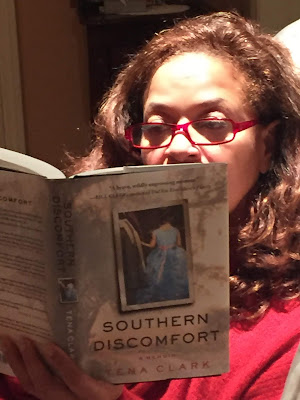 Hello, it's Debbie Allen!!! Yes, I like to dance and direct and act and produce and cook but this is the beginning of something new! That’s right "Everyday People" is me putting my two cents on the table about books, theater, film, television, art and other things we all should know about or consider.

Dr. Charles Blockson told me I was a “bibliophile;” a person who loves books, when he visited my home and saw stacks of books in the living room, in the kitchen and in the bathroom. It was my love of books that led me to the Howard University Bookstore (my alma mater) where I found a book called Amistad, a collection of essays and speeches by Black Academicians, religious leaders and philosophers. The preface had a one page summary of the Amistad mutiny, Supreme Court trial and eventual release of the African captives who were sent back home. That little book led me on an 18-year journey that resulted in an Academy Award nominated film directed by Steven Spielberg that starred Matthew McConaughey, Djimon Hounsou, Anthony Hopkins, Morgan Freeman, Chiwetel Ejiofor and Anna Paquin.  I served as producer along with Colin Wilson and had the joy of working with John Williams (Composer -Star Wars, Schindler’s List), Rick Carter (Production Designer - Avatar, Lincoln) and Ruth Carter (Costume Designer - Black Panther). So here we goooo!!!


BOOK OF THE WEEK: Southern Discomfort  by Tena Clark 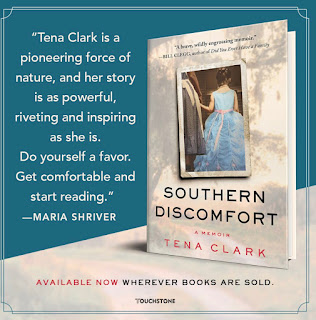 Tena Clark's memoir Southern Discomfort is a true coming of age story that reads like a Tennessee Williams play. Set in the deep south in the 50’s and 60’s, where magnolias, catfish, the Bible, guns, alcohol, racism and carnal knowledge collide, Tena's story confronts the heartbeat of America's identity crisis. A crisis of faith, family, freedom and truth. She knew she was gay at six years old.

The daughter of a wealthy womanizing father, a gifted alcoholic-gun toting mother, the youngest of four daughters, Tena was practically raised by Virgie, the Black maid. Southern Discomfort addresses the Jim Crow South and Civil Rights from a young white girl’s perspective standing up for her  “Virgie." She turns old southern values upside down by marrying a woman. Talented like her mother, Tena rises to become a Grammy Award winning music producer, loving mother and wife. This story will make you laugh out loud, cry and hope that one day you can stand as tall as Tena. 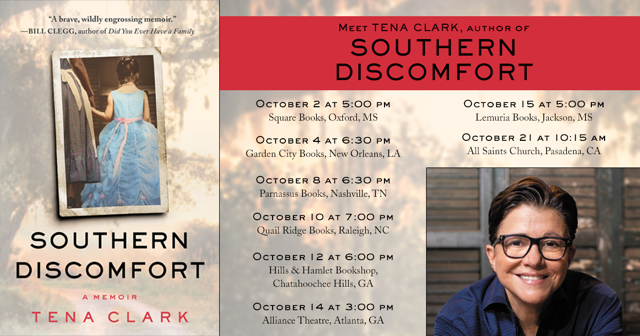 WHAT REALLY HAPPENED AT ELLE'S "WOMEN IN HOLLYWOOD"

Debbie Allen
In a career that spans three decades, the name Debbie Allen is synonymous with dynamic energy, creative talent and innovation. For her vast body of work, Ms. Allen has earned three Emmy Awards, a Golden Globe, five NAACP Image Awards, a Drama Desk, an Astaire Award (for Best Dancer), and the Olivier Award. She holds four honorary Doctorate degrees and has a star on the Hollywood Walk of Fame. Her directing and producing credits include television classics such as FAME, Grey’s Anatomy, Scandal, How To Get Away With Murder, Jane the Virgin, Empire, A Different World, Everybody Hates Chris, Stompin’ At The Savoy, Polly, That’s So Raven, Cool Women, Quantum Leap, The Fantasia Barrino Story, and on stage, Cat on a Hot Tin Roof. She is currently Executive Producer of Grey’s Anatomy and the Artistic Director of the Debbie Allen Dance Academy.